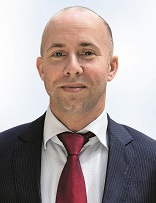 Visiting Professor at University of Genoa, Via Balbi, 22, 16126 Genoa, Italy

After having graduated with highest honours in Dutch law from Utrecht University in 1997, he was awarded the degree of Magister Juris in European and Comparative Law by the University of Oxford (St. John’s College) in 1998. From 1998 until 2001 he held the position of lecturer and researcher at the Molengraaff Institute of Private Law in Utrecht. In 2002 he defended his PhD in Utrecht (Indirect Representation in European Contract Law (Kluwer Law International 2005)). From 2002 until 2010 he was an attorney-at-law (advocaat) with the leading Dutch international law firm De Brauw Blackstone Westbroek in Amsterdam where he practised banking and securities law (both the private law and regulatory aspects).

He is extensively engaged in the provision of training to attorneys-at-law, financial regulators and financial professionals. He also is a Member of the Dutch Banking Disciplinary Committee (Tuchtcommissie Banken).